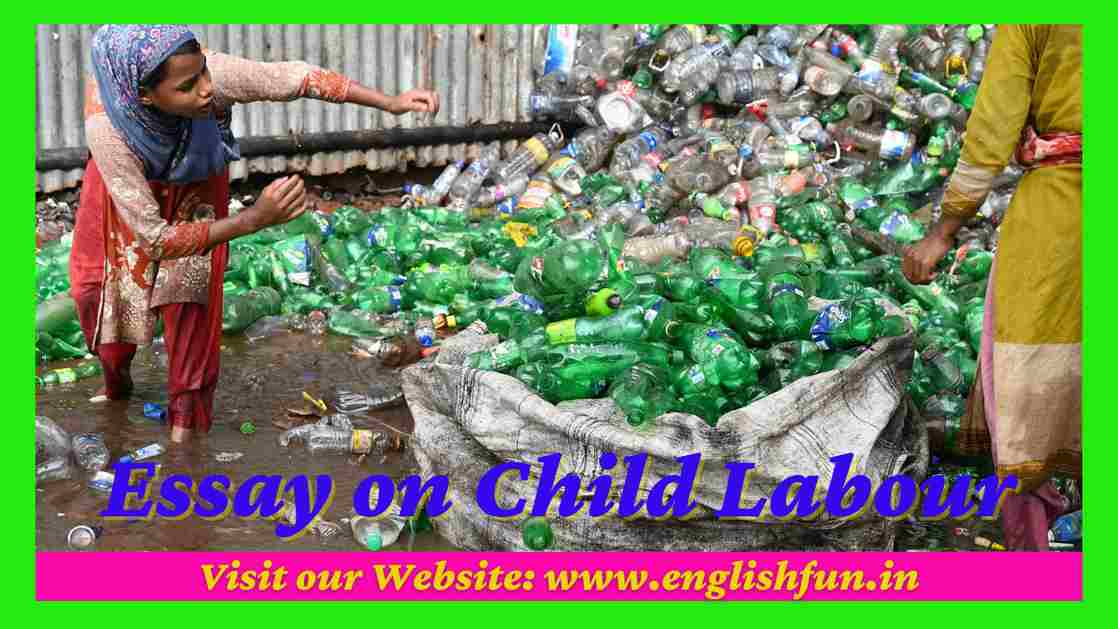 In This article an Essay on Child Labour, We will come to know about the fundamental rights of a child and how is a child exploited as a labour in the hotels,pubs,dhababs and many other places. Child labour is one of the gravest problem that our country has been facing since long ago.

10 Lines on Essay on Child Labour

1.The working children of age group 6 to 14 are known as child labour.

2.They are forced to miss their childhood which exerts a negative influence on them.

4.They are also not sent to the school for education and are later left with a poor social status.

5.Child labour is a serious crime against our constitutional law.

6.The constitution gives the the right to get an education until they are not mature.

7.It kills the natural skills of children.

8.Such children are socially, physically and mentally tortured.

9.Child labour is the root cause of a developing country.

10.We should avoid child labour to get a real and developed India.

India is a very great country. Our country has unity in diversity. There are many religious and language speaking people who dwell here. We are the most peaceful country in the world. But, some problems are there which attack the prestige of our country. Child labour is one of them. It is the gravest problem of the country which is creating hollow in the human resource development. The children of age group 6 to 14 are involved as labour in many factories and working places known as child labour. Such children get no opportunity of education which is a very serious issue. They are also forced to miss their childhood which becomes a hurdle in their mental development.

There are many major reasons for child labour. One of them is poverty. Poverty leads such children to knock on the doors of hotels, restaurants, bars and other working places. A large number of populations of our country are living below average income. They don’t own a house to live in and a job of regular income.

Most of the parents of these children are not educated. They don’t know the value of education. The system of child labour is traditional in their families. He sees more benefits in child labour than sending their children to a good school.

This is also a minor reason for child labour. In our Indian society, a single parent manages a family of 8 members which is economically not sustainable. In the case, the small children are forced to practice child labour.

The government has taken many initiatives to eradicate child labour from India. There are several laws implemented. According to the Child Labour Act of 1986, children below 14 years are not to be sent to any workstations, it is a criminal offence.  According to article 21 A, It is the duty of a state to provide free education to all children between 6 to 14 years. It is their birthright. Similarly, Article 24 A states that no children can be forced to work in any factory or mine or any hazardous place.

Child labour can’t be removed only by implementing the rules. People sometimes don’t care about the rules and it also does not work on the root cause. The education can only remove such problems from our society. The people have to make aware for education. The government has to take more initiatives to promote education and its benefits. There must be door to door campaign. The mid- day meal is a good step to bring children to school.

Child labour is a dark spot in our country. India is the second-highest country in child labour after Africa. The government is doing its duties but we should also promote education to keep away such problems. We have to become a wall against child labour by sending our children into good schools for getting an education.

The children of age group 6 to 14 are involved as labour in many factories and working places known as child labour. Such children are away from education and from a better life.

Q.How do you end a child labour essay?

A child labour essay should always be closed with a proper conclusion where you should mention some step regarding the eradication of child labour. Child labour is one of the serious problems that India has been facing sincle long ago.

Q.What are the main causes of child labour?

Q.How can we stop child labor in India?

Following steps can be materlized to stop child labour in India.