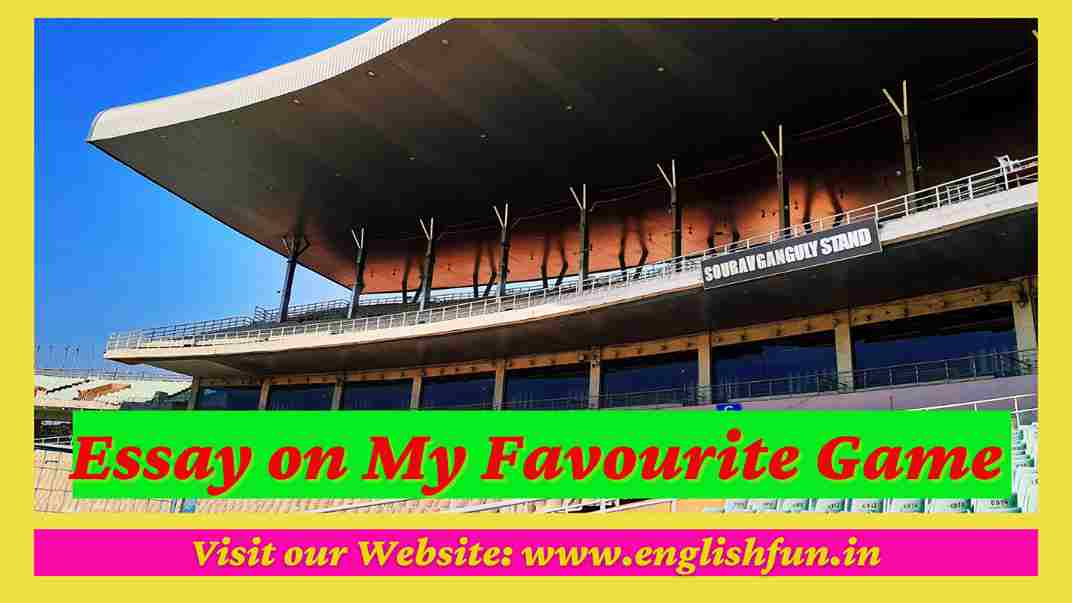 Playing game exercises our body as well as mind. In the article, My Favourite Game Essay we are going to provide a short paragraph of 10 lines for kids and a long essay of 500+ words for junior and senior class students

Everybody has a favourite game that he/she likes the most to play.

My favourite game is cricket.

I like playing cricket very much since my childhood.

Cricket is popular whole over the world.

My favourite cricketer is M.S Dhoni.

We play Cricket in the evening and morning.

I am the captain of the school cricket team.

Sports exercise the muscles and brain.

Cricket is a sport of discipline, unity and friendship.

Also Read: Essay on My School

I love to play cricket. Cricket is my favourite game. This game is admired in the whole overworld. The birth country of Cricket is England. We play cricket in the morning and evening. My favourite cricketer is M. S Dhoni.  He is the legend of Cricket.

India has won the world cup in all formats under his leadership.  I also want to be a cricketer like him. Cricket is an outdoor game. It exercises our muscles and brain too. It supplies powerful energy and always keeps our attitude positive.

Cricket is not a game but a religion in India. People leave all important works for watching matches. The madness of cricket can be seen in the stadium when the players play live. The audience goes crazy in supporting their favourite player.

Cricket was founded in South East England in the 16th century. It became the national game with the arrival of the 18th Century. Later, it spread worldwide in the 19th and 20th centuries. Cricket has the highest fan base in the world after football.

This game was first played by Prince Edward and later went viral worldwide. It is a game generally played in a big artificial stadium with two teams of players. Each team contains 15 players. Among them, 4 players are out of the ground from both teams.

Bats, balls, stumps, gloves, pads, helmets, jerseys etc. are some of the important things to play Cricket. The game is also getting popularity in villages too. All the children and youngsters can be seen playing cricket in the evening time.

They create two teams on their own and keep some money as a prize. Many people organize tournaments at local levels.

Cricket is a game that is played in many formats. The game also gets modification time to time according to its popularity and demand. The International Cricket Council  (I.C.C) organises the matches in different formats.

Test Match: This is the slowest format of a cricket match played for 5 days. The match is organised between two countries. Both the countries are chosen by ICC. This is also known as a practice match where players are not bounded with overs.

One Day International Match (O.D.I) : It is a 50 overs match completed in one day including day and night. Such formats are also organised at International levels between two chosen countries. At the end of the match, one team has announced the winner and was awarded trophies and cash money. ICC Men’s Cricket World Cup is organised at the interval of every 4 years. India has won two world cups.

T-20 Match: It is a shortened game format played between two International teams. The match has to be completed over the span of 3 hours only.  The result of the match is decided very soon.

Indian Premier League: Cricket: The format getting commercialise day by day. I.P.L is the perfect example. The game is played in T-20 format but is the more popular overall format in India. Many reputed businessmen and celebrities own a team. Many abroad cricketers also take part in I.P.L  I.P.L becomes more splendid with dancing girls (cheerleaders) who perform a dance with every sixes and four.

Must Read: (Click Here) Essay on My Favourite Teacher

Cricket is a very popular and demanding sport. The prestige of cricket should not be affected by fixing matches, bets and any other gambling.  More commercialisation can impact the soul of the game. The I.C.C should take some strict against some mishappenings to maintain the popularity of this game lifelong.

Essay on My Best Friend

An Essay on Independence Day