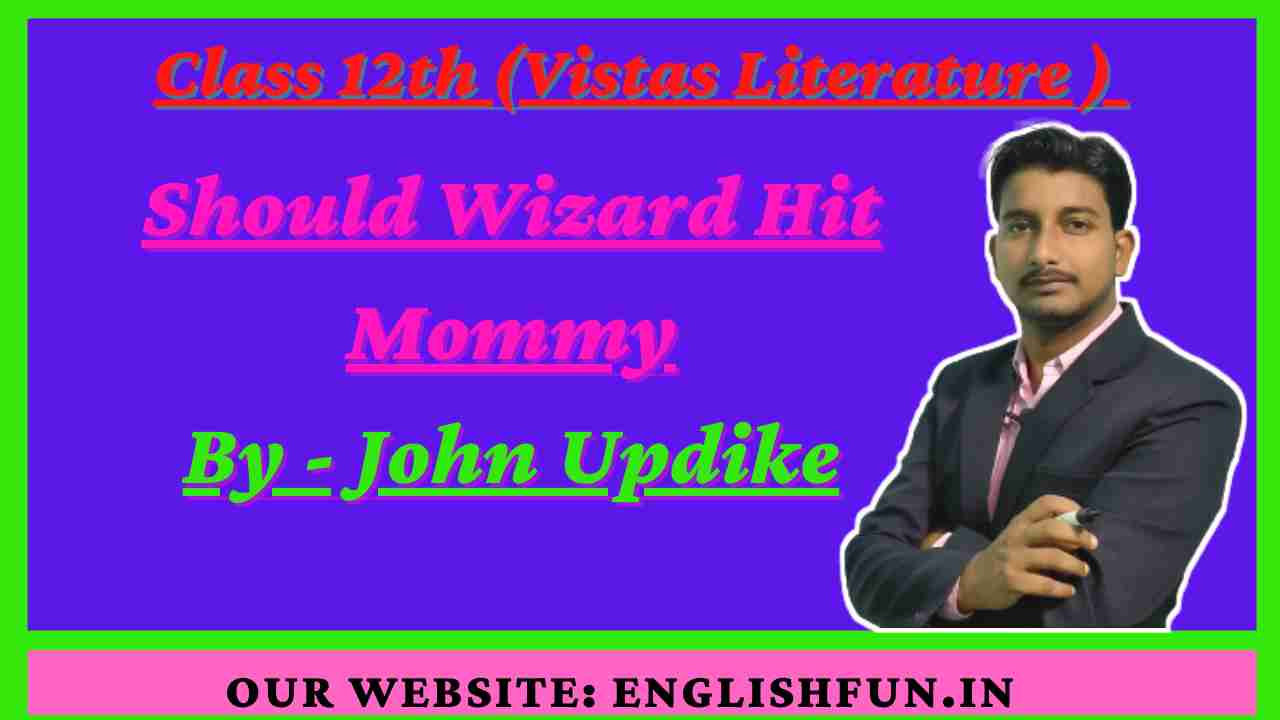 In this article, Should Wizard Hit Mommy we are going to talk about its author, main points, ncert solutions, summary and difficult words. The chapter has been detailed as per the convenience of the students.

John Hoyer Updike was born on March 18, 1932, in  Reading, Pennsylvania, United States. He was an American poet, short-story writer and novelist.  His notable works are Rabbit Angstrom, Henry Bech and The Witches of Eastwick. He died on the 27th of January, 2009 at the age of 76 in Danvers, Massachusetts, United States.

The children should be given utmost freedom to choose their career and live life as they want. The work of parents is to help them in choosing future.

1. Jo (Joanne): Jo is a little daughter of four years old. She has a habit of listening to bedtime stories. Jack always weaves an imaginary story for her. Such a habit of story listening is developed when she was only two.

2. Jack: Jack is the loving father to the little girl, Jo. He always weaves a story for Jo. The story always starts with a small creature named Roger. One day, He recites a story of Roger Skunk. The story is beautiful but Jo does on agree with her father in conclusion.

3. Roger Skunk: It is a small American creature who lives in the dark forest. It looks like a squirrel and smells very bad. He has no friends. Roger’s bad smell is changed into a rose smell by the magician.

5. Owl: He suggests that Roger Skunk visit the magician.

The story raises a very sensitive aspect of a little girl when her father recites her a story.

Jo is the 4-year daughter of jack who is in the habit of listening to bedtime stories.

Jack used to tell her a story every evening and especially for Saturday naps.

The story has always a character started from Roger.

The story always had an animal with a problem. The old owl advises him to visit the wizard who would solve the problem.

Roger Skunk’s bad smell was changed into a rose smell by the wizard.

Skunk’s took him back to the wizard and asked her to restore the previous smell as she never wanted his son to lose his original identity of Skunk.

Jo was not happy at all with the ending of the story. She wants magician to hit her back and not restore the smell.

But, Jack supports skunk’s mother and says that parents are always well-wishers.

Jo supports the wizard and says that a child should have the right to decide his / her future. The parents should not establish their authority. They must support their ward to achieve what he/she wants to achieve.

The story raises a very sensitive issue of a child and a father’s perspective of thinking. The narrator asks parents to help them to achieve a goal not to establish the authority of being elder and experienced. If a child has a different goal that he wants to continue the parents should not create an obstacle to achieve the same. The parents must be cooperative and let the child decide his/her future in their way.

2. How does Jo want the story to end and why?

Jo wants the story to end in a different way. She wants the wizard to hit the mother and not to restore the previous smell because Sunk was very happy with this rose smell. She simply says that a child must have the right to choose his/her career. The parents have only the right to support them not to decide the future of their children.

3. Why does Jack insist that it was the wizard that was hit and not the mother?

Jack is the father of Jo and he is a very protective and caring father. He is a man of traditional thinking and believes that parents must have the right to decide the future of their children. He is not aware of modern culture. Therefore, he positively takes the mother and supports her blindly when she hits the wizard and asks her to restore the previous smell.

4. What is your stance regarding the two endings to the Roger Skunk story?

Both, two endings are good as per the different perspectives of thinking. But, I would support Jo’s point of view. She has raised a very sensitive issue on the Indian parenting system. In our system, a child becomes a puppet at the hand of his/her parents. They are no doubt in saying that parents are always well-wishers. But, a child must have the freedom to choose his career as per his/her will.

5. Why is an adult’s perspective on life different from that of a child’s?

An adult’s perspective on life is always different from that of a child because an adult thinking schema is based upon experiences and exposure to the world around them. Many of them are still having that of traditional and ancient thinking but the world is changing very fast. A child thinks very tenderly and his opinion is based upon the things that he or she sees around. They want to run for their passion and aspiration.

1. Why did Roger Skunk go to see the old owl?

Roger Skunk visited the owl to get rid of his foul smell because of why no other creature accepted him expected his mom. The owl suggested visiting the magician who changed his foul smell into a rose one.

2. Why does Jo insist that her father should tell her the story with a different ending—where the wizard hit that mommy?

Jo insists her father recite the story with a different ending- where the wizard hit that Mommy because she wants to punish Skunk’s mother who was intruding in his happiness. Jo simply wants a child must have the right to decide his future on his/her part.

3. Why was Roger Skunk’s mommy angry? What did she finally tell him?

Roger Skunk’s mommy got angry because of the rose smell. She took her back to the wizard, hit him and asked to restore the original smell because she never wanted her child to lose his original identity. She wanted the world to accept his child with all his merits and demerits.

4. How was Skunk’s story different from the other stories narrated by Jack?

Skunk’s story was completely different from the other stories narrated by Jack because the ending of the story could not satisfy her. She was not happy with the ending at all. She wanted the magician to hit mother back and not to restore the previous smell.

5. Which animal did Jo suggest for the story that day? What do you know about this new animal?

Jo suggested the name of Roger Skunk for the story on that day. Roger Skunk was a  tiny animal who lived in the deep wood. He had a foul smell because of why no other creature loved with him to play. He had to live alone with no friends.

The interesting story Should Wizard Hit Mommy has been written by John Updike. The writer says here that there should not be any pressure on the child regarding choosing the future.  The parents must co-operate with their child all time. Jack was the father of two kids – Bobby and Jo. His wife, Clare was carrying their third child.  Jo was the little daughter of Jack who was four years old and always listened to a story in the evenings and Saturday naps. This habit was developed when Jo was only two years old and continued for the last two years. The habit was developed when Jo was only two. The story always started with a common word, Roger like Roger fish, Roger squirrel etc. The story was always repeated except the name of the characters as we listened to many stories from our granny in our childhood days. The story always had a problem and the wise owl used to suggest visiting the magic who probably solved all the issues. Jack took the story session very boring especially on Saturday naps because Jo never fell asleep in naps anymore. One fine Saturday, Jack asked her daughter about the title of the story. She confirmed on Roger Skunk, a new animal. Jack starts the story of Roger Skunk who lived in a deep forest and smelled badly. For that reason, he was alone with no friends. He went to the magician after the suggestion of the wise owl who changed his bad smell into a rose smell as per Skunk’s wish. The magician demanded seven pennies for his work but Roger Skunk had four pennies and the rest of the three pennies was managed to form a ‘magic well’ after the suggestion of the magician. The skunk was very happy. All of the creatures became his bosom friends who hated him before. But, his mother was not happy with the smell at all hit the wizard with an umbrella stick and asking him to restore the previous smell against the wish of Roger Skunk. Skunk’s mother hugged him at bedtime and told that she loved her a lot. Jack thought that story ended up but Jo was not happy with the ending. She asserts that Wizard should hit mother back and not restore the previous smell. The story ends up with two opinions of Jo and Jack. Jack supports the mother and says that parents are always well-wishers. But, Jo supports the wizard and says that a child deserves utmost freedom to choose his/her career.

Fatiguing- cause (someone) to feel exhausted.थकाऊ

Humiliation- (to insult someone) बेइज़्जत करना

Stinky- (having a strong or unpleasant smell) दुर्गन्ध

Enormous- (a large number of) असंख्य

Swamp- (an area of low-lying) दलदल

Relapsed- (return to a less active or a worse state) .पुनरावर्तन

Emphasis- (special value given to something) जोर देना