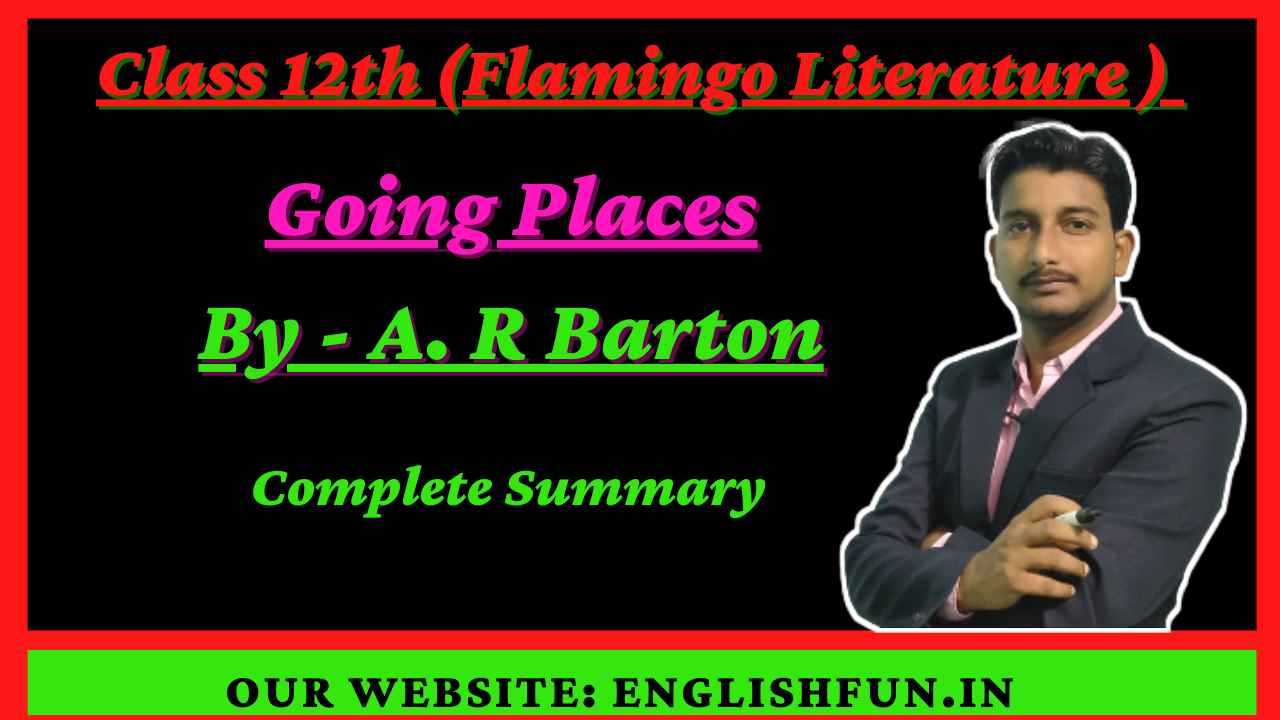 In this article, You will get Going Places Class 12 Solutions along with the theme, main points, summary and difficult words. The story, going places revolves around the story of a girl, Sophie who has no boundaries in her imagination and loses herself in the world of fantasy.

Going Places: About the Writer

A R Barton is a modern writer. He was born on 17 December 1913, London, United Kingdom. He earned his degree from Britannia Royal Naval College. He lives in Zurich and writes in English. He generally raises the issues of adolescents.  He died on 4 April 1943, Llandow, United Kingdom.

The story is based upon the theme of adolescents fantasising and hero worship.  The writer wants to focus on those teenagers who are having different goals in their life.

1. Sophie- Sophie is a daydreaming girl without any sense of reality. She always lives in an imaginary world having different kinds of dreams like being an actress, manager, fashion designer and owning a boutique.

She weaves the imaginary story of meeting with Danny Casey, the great footballer of Ireland. At last, Sophie gets nothing except misery and pain.

7. United – Name of the Football team

1. Where was it most likely that the two girls would find work after school?

The two girls are most likely to get the job in a biscuit factory after school. Jansie knew it properly and completely prepared herself for the job whereas Sophie was a fighting natured girl. She never wanted to accept the reality of life.

2. What were the options that Sophie was dreaming of? Why does Jansie discourage her from having such dreams?

Sophie dreamt to be an actress, manager, fashion designer and owning a boutique. Jansie always discouraged her from having such dreams because she knew properly that such dreams would give nothing except misery and pain.

1. Why did Sophie wriggle when Geoff told her father that she had met with Danny Casey?

Sophie wanted to keep the meeting secret because she knew very well that everybody would laugh and criticise her after knowing her story with Danny Casey. Sophie was a day- dreaming girl and people were very familiar with her wild stories.

2. Does Geoff believe what Sophie says about her meeting with Danny Casey.

Geoff does not believe completely in the story. He believes a little part of it when Sophie talks about her next meeting with Danny Casey. She further explains how Danny Casey stood by her in Royce’s window.

3. Does her father believe her story?

No, her father does not believe the story a bit. When Geoff tells her father that she had met with Danny Casey. He completely ignores it and takes it to be another wild story. He starts talking about the other great footballer of United.

4. How does Sophie include her brother Geoff in the fantasy of her future?

Geoff is the first person who was the closest to Sophie. She shares her meeting with him and explains everything in detail. She also says him that they both are going to meet him on coming Saturday.

5. Which country did Danny Casey play for?

Danny Casey played for Ireland. He was a good footballer.

1. Why didn’t Sophie want Jansie to know about her story with Danny?

Sophie did not want Jansie to know about her story with Danny because she both were classmates and knew much about each other. Sophie feared that She would spread the news in the whole neighbourhood as well as criticize her for a new wild story.

No, Sophie did not meet Danny Casey in reality. She weaved an imaginary story to fool the people around her. She was fascinated within him in her dream and imaged him coming. She also sat under a tree and waited for him. She had gone mad in his imagination.

3. Which was the only occasion when she got to see Danny in person?

The only moment when she got to see Danny in person was the United’s match when she along with her family members went to the stadium. Danny Casey also played that match and won by 2-0. Danny has scored the last goal.

1. Sophie and Jansie were friends and classmates. What were the differences between them that show up in the story?

2. How would you describe the character and temperament of Sophie’s father?

Sophie’s father has middle-class behaviour and attitude and likes to live a simple and calm life. He is completely tired by the daily work. He doesn’t believe in the meeting of Danny Casey and considers it to be another wild story. He likes watching a football match and go to watch the match every Saturday. He blesses Casey and predicts that he will play like Tom Finney one day.

3. Why did Sophie like her brother Geoff more than any other person? From her perspective, what did he symbolize?

4. What socio-economic background did Sophie belong to? What are the indicators of her family’s financial status?

Sophie belongs to a lower-middle-class family but her financial status does not allow her to think more than working in a biscuit factory. The occupation of his father and her brother indicate the family’s financial status. Her brother has left school and worked as an apprentice mechanic. His father is working all day even after bad health. He has no good money to get good treatment.

The story, Going Places has been written by a modern writer, A. R Barton. The story is based upon the theme of adolescents fantasising and hero worship.  The writer wants to focus on those teenagers who are having different goals in their life.

Sophie is the central character in this story. Sophie and Jansie are classmates and friends. They are likely to get a job in a  Biscuit factory after school. Jansie is a practical girl. She believes in the reality of life whereas Sophie is a daydreaming – girl. She has various dreams.

She shares a story to Geoff about her meeting with Danny Casey, the Irish footballer. Geoff has left his job three years ago and works as an apprentice mechanic. She is very close to her brother and always shares her feelings first.

She tells that they first meet at Royce’s window where Casey stand by her. She further explains that Casey has green and gentle eyes and is a medium height boy. She wanted to take an autograph but had no pen or papers.

She gets a promise to meet next Saturday for an autograph. Geoff recites the story to father. Her father has got bored with the wild stories of Sophie. This time, he does not care. Later, Jansie hears about the meeting from Frank.

Sophie never wants to let the secret out because she knows that nobody will believe her story with Casey.   But, Geoff leaks the meeting to everyone.  They go to the stadium to meet with Casey . This is the only moment when she meets Casey in person.

On that particular day, United won the match by 2-0. Casey had attractively secured the last gaol. Danny Casey never comes to meet her because Sophie was an unknown girl for him. Sophie waits for her under a tree and drowns herself in his imagination.

She feels that Casey is coming to her. Finally, she is aware of the truth and returns to her home. At last, Sophie gets nothing except misery and pain. The story highlights the goal of teenagers which sometimes remain incomplete.

Freckled (Spot on the face)  मुहासे