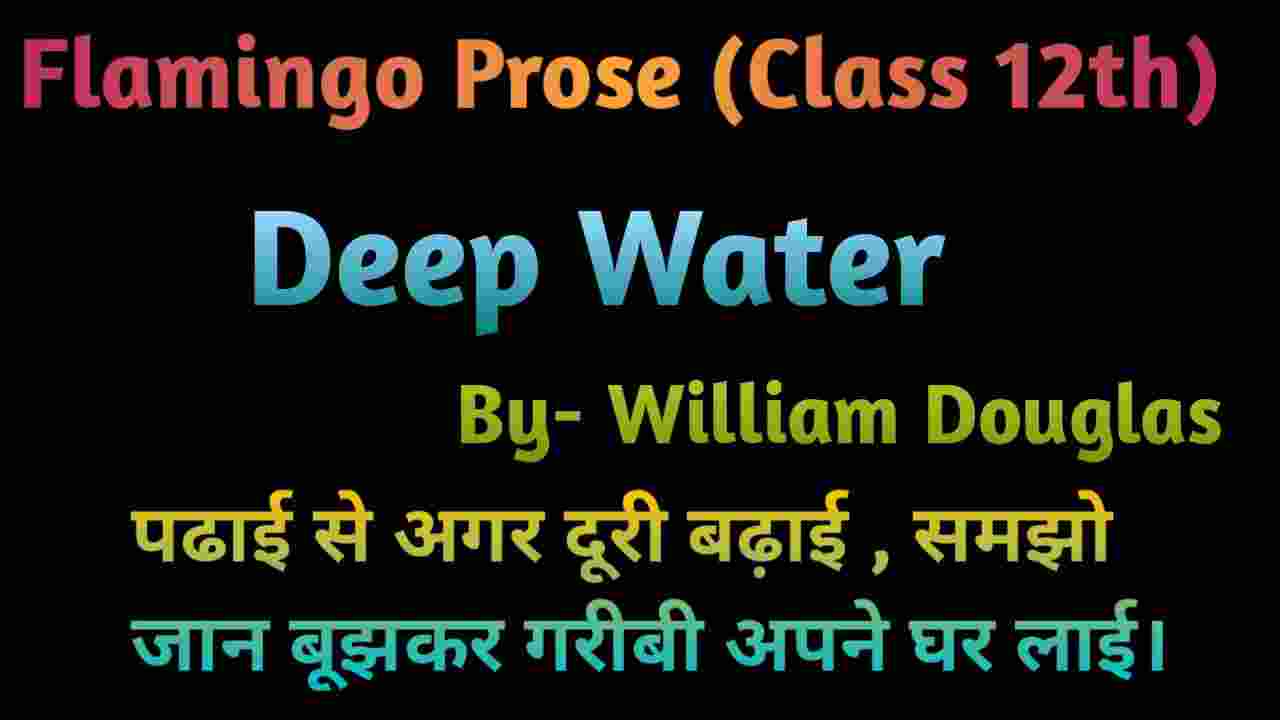 William Orville Douglas was born on Oct. 16th, 1898  in Maine Township, Minnesota ( U. S).  He taught for two years in the high school of Yakima.

The writer talks here about his fear of water which frequently attacks him and refreshes from time to time.

3.1.Douglas (Narrator of this story)

Douglas is the narrator of this story. He has an ardent desire to learn swimming since his childhood.

He went to the beach in California at the age of three to four. The powerful waves knocked over him. His father began to laugh and this develops a great aversion inside Douglas.

Later, he joined Y.M.C.A pool at the age of ten or eleven. He was thrown into the deep water there. Finally, he learned swimming with the help of an instructor.

He makes him a good swimmer with the help of the safety belt, the rope, the water wings, and the pulley.

It is a pool that Douglas joined at the age of ten or eleven. The full form of this pool is the Young Men’s Christian Association.

It is a very safe swimming pool because it is only two or three feet deep at the shallow end and nine feet deep in the middle.

It is a river nearby Douglas’s house. He went there to learn to swim. But, It was very dangerous and his mother always warned him not to go there.

He is who trained the narrator and boosted him up with positive vibes.

1.The story, Deep Water is taken from “Of Men and Mountains.”

2.A powerful wave knocked over him when he was at the beach in California at the age of three or four. At the same time, his father started laughing.

3.He developed a great aversion to water since his childhood.

4.His mother warned him against the Yakima River and kept fresh in his mind the details of each drowning.

5.He joined Y. M. C. A. swimming pool which was nine feet deep and two or three deep at the shallow end.

6.He waited for the other boys to come while a strange boy picked him up and tossed him to the pool.

7.The strange boy had huge muscles, thick hair on his chest, and around 18 in age.

8.He had a plan to take a jerk and came out to the surface like a  cork but fails.

9.Nine feet were more than ninety feet. The lungs were ready to burst.

10.On the third trial to overcome, he became senseless and laid senseless upon the water.

11.He was carried to the locker room.

12..The experience had a deep effect on Douglas because he couldn’t take dinner on that night as well as he never dared to share the incident with anyone.

13.The fear of water always haunted him.

14.The instructor built him a good swimmer with the help of all safety like water wings, safety belt, the rope, the pulley e.t.c.

15.Finally, he conquers his old terror in Lake Wentworth at New Hampshire after swimming two miles.

5.1Think as You Read

1.What is the ‘misadventure’ that William Douglas speaks about?

Douglas talks about the ‘misadventure’ of Y.  M. C.A.  pool where he is thrown into the deep water by an unknown boy. He thinks to take a jerk and come out to the surface like a  cork but fails.

2.What were the series of emotions and fears that Douglas experienced when he was thrown into the pool? What plans did he make to come to the surface?

When he was tossed into the pool, he was a little panicked. The nine feet was like ninety feet for him. Later, he thought of a marvellous plan to take a jerk and came out to the surface like a cork but it did not work.

3.How did this experience affect him?

The experience had a deep affect on Douglas as he didn’t take dinner that night and never dared to come into contact with water. He was also not able to share the incident with anyone.

4.Why was Douglas determined to get over his fear of water?

Douglas determined to get over his fear of water because he was tired of this fear. The old fear always haunted him and developed hatred within him. Besides all these things, he wanted to be a good swimmer since his childhood.

5.How did the instructor “build a swimmer” out of Douglas?

The instructor taught him swimming piece by piece. He gave him a safety belt, water wings, rope, and the pulley. He cared and instructed him all the time. He taught breathing in the water too. Finally, he could become a good swimmer.

6.How did Douglas make sure that he had conquered the old terror?

OR How did Douglas overcome his fear of water?

1.How does Douglas make clear to the reader the sense of panic that gripped him as he almost drowned? Describe the details that have the description vivid?

Douglas was very fearful when he was thrown into the deep water as he had no experience of swimming. His fear can be described exactly with the help of some sentences narrated in the textbook-like ‘My lungs were ready to burst.’, those nine feet were more like ninety.’ etc

2.Why does Douglas as an adult recount a childhood experience of terror and his conquering of it? What larger meaning does he draw from this experience?

He recounted a childhood experience to establish willpower, passion, and deep determination. He tried to break the barrier of limit and impossible. He wants to say that where there’s a will, there is a way.

The story,  Deep Water is written by William O Douglas. This is an autobiographical recount. The chapter has been picked up from ‘Of Men and Mountains.’

The narrator, Douglas shows an aversion to water since his childhood. Such fear comes from the beach of California when he was with his father at the age of three or four.

A powerful wave knocked over him. His father laughed at him. This developed a great aversion within him. He chose the Y.M.C.A. pool which was very safe because it was only two or three feet at the shallow end and nine feet deep at the middle of the pool.

He joined Y.M.C.A pool because his mother always warned against the Yakima River. One day, a young boy of eighteen picked him up and threw him into the deep water.

He went to the bottom and took a jerk to come out on the surface like a cork but fails. He tried three times. On the third trial to overcome, he became senseless and laid senseless upon the water. Next time, he found himself lying on his stomach beside the pool. He was not feeling good.

This misadventure turned his life. He couldn’t share the incident with anyone because he was hardly feared from the water.

With the passage of time. He joined a pool with an instructor. He managed all the safety like water wings, the safety belt, the rope, the pulley etc The instructor taught him swimming step by step.

Finally, he made him a good swimmer. He swam into many pools and lakes. But, one day,  when he was swimming in Lake Wentworth of New Hampshire.

The old fear came back but he swam from one shore to the back. Finally, he confirmed that he had conquered the old terror. The chapter has a beautiful message that a man’s most fear is fear itself.

Hope you all guys liked the Deep Water Summary

My Mother at Sixty Six

An Elementary School Classroom in a Slum