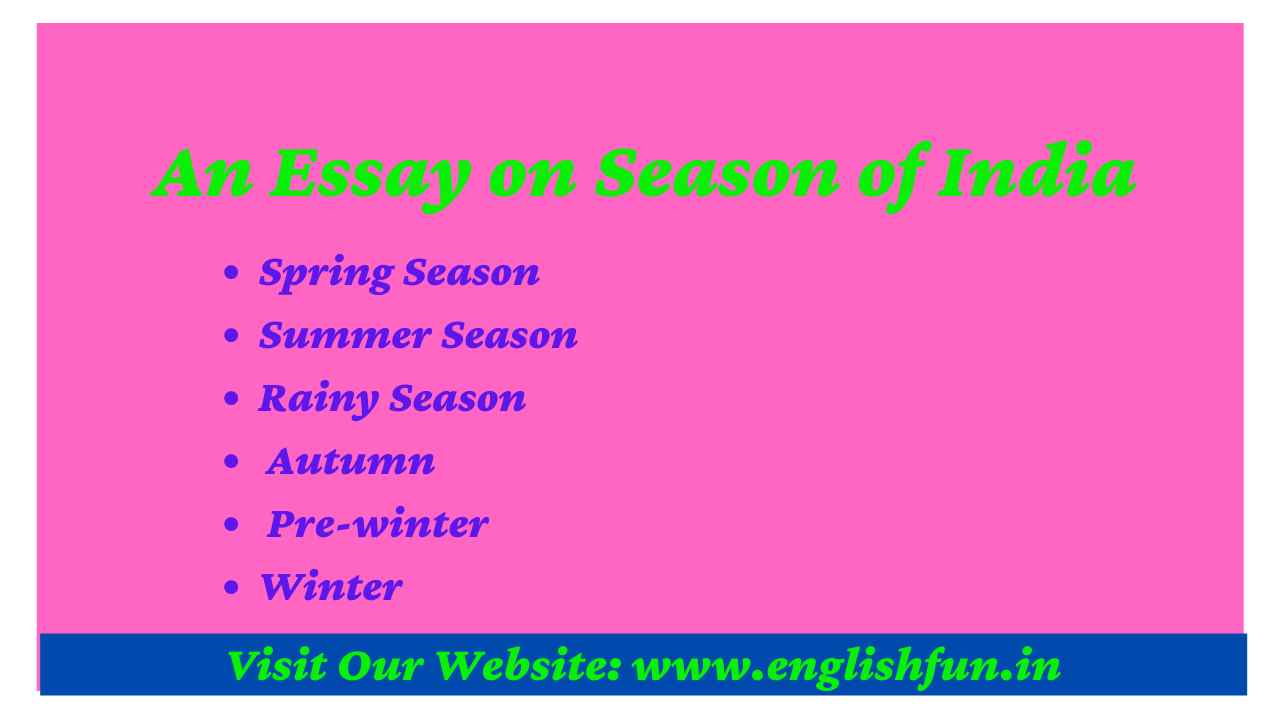 India is the land of different seasons. Spring, Summer, Rainy Season (Monsoon), Autumn, Pre-winter and Winter are the six-season of India.  Seasons establish the law of nature and help people to nurture their life. The change in season is very much required according to the time. The season in different parts of India changes with altitude, latitude, and distance from the sea level.  Each season has its pattern of weather and has varying hours of sunlight during the days. All the seasons are very crucial for people as per time. Winter is important for Rabi crops whereas Rainy is important for Kharif crops.

The season is also  known as ‘Vasant Ritu.’  According to the Hindu calendar, the month falls in Chaitra and Baisakh. It is for two months and comes between March and April. It is one of the pleasant seasons because we feel neither hot nor cold. The temperature is equal day and night. The average temperature throughout the season is 32 degrees centigrade. The season arrives after winter and departs with the arrival of Summer. The bees and butterflies hover over the flowers. parrots, cuckoos and other birds release their soulful voice in the form of song creating a very soothing and pleasant environment. The trees getting new leaves on their branches overjoys us. The greenery nature attracts us. The season spreads its warmth to the beggars and wanderers. Holi, Vasant Panchami, Gudi Padwa, Baisakhi, Hanuman Jayanti etc are some of the festivals celebrated in this season.

Summer season (Grishma Ritu) enters in Jyeshtha and Ashadh and between May to June as per Hindi and English calendar respectively. It is the season between Spring and Autumn. It is the hottest season in India. The average temperature remains around 38 degrees centigrade. The wells, ponds, hand pumps and rivers are dry due to extreme heat. The country feels scarcity of water and human and animal bodies are dehydrated. Although, it is very important for the water cycle. The days are longer and nights are shorter in Summer. The schools and colleges are off for summer vacation. Many parents go to a hill station with their children. This adds a good memory to their life. Many indoor games are played where whole family members sit together and interact with one another. In villages, people enjoy sitting on the coat under a mango tree in the absence of A.Cs or Coolers. The farmers prepare the soil for the next crop. We get a chance to eat many fruits like mangoes, jackfruits, litchis, guavas, watermelons, grapes, pineapples and blackberries. People enjoy taking cold drinks, ice-creams, kulfis and chilled juices. Many Zaid vegetables like bitter ground, pumpkin and ladyfinger are special on demand. The cucumbers have a separate fan base in this season. Rama Navami, Buddha Purnima, Rath Yatra, Baisakhi, Hanuman Jayanti, Mahavir Jayanti, Ramzan and many more are some of the great festivals of this season.

This is a boon season for farmers whose farming mainly depends on Monsoon. It holds the month of July and August and Shravana and Bhadrapada (Sawan and Bhado) according to the Hindi calendar. The average temperature measured is 34 degrees centigrade. The days are short and nights are long. The season is very compatible for Kharif crops.  It is called the queen among the seasons as it helps a seed to take birth. The rainy season brings real happiness and charm to our country. The paddy crops move in the direction of air as if it wants to welcome a person coming toward it. Gigantic clouds roar in the sky and the bird sings in a melodious and peaceful voice in a far forest. The whole nature satisfies the long thirst. The atmosphere is visible. Men and women are seen along with raincoats and umbrellas. The season fascinatingly revives the childhood days. Onam, Krishna Janmashtami, Raksha Bandhan. Nag Panchami, Ganesh Chaturthi etc are its famous festivals.

The season comes in September and October, Ashwin and Kartik months as per Hindi Calendar. The season is also popularly known as the fall season because the leaves disappear from the branches and hot and humid weather make human life uncomfortable. It starts after the monsoon or rainy season and lasts till the start of the pre-winter season. The average temperature of the season is 33 degrees centigrade. The days and nights are almost equal. The atmosphere is completely cloudless and the moon is very clear in the sky. The people resume their stopped business as they all finish their farming in Monsoon. Some Hindu festivals like Navaratri, Deepawali, Sharad Purnima, Vijayadashami etc are celebrated with joy.

The season falls before Winter and people feel partially cold. Pre-winter inclines in November and December. As per the Hindu calendar, these season occurs in the Agrahayana and Pausha ( Agahan and Poos) months. The environment signals the fall of temperature continuously. Pre-winter is the time before Winter and after Autumn. 27 degrees centigrade is the average temperature measured in Pre-winter. The days are shorter than nights. Nights are mornings are foggy. Especially, People are unable to locate the path in the morning. The occasional rainfall is a problem in this season that ruins some of the good crops. Pre-winter is the time when people prepare themselves to face the bitter cold. They buy different woollen clothes to warm themselves. Many sports like Cricket, football etc are organised in this season. Some people are caught by cold, cough, asthma. The weather is painful to the beggars and homeless. Diwali  Bhai Dooj etc are celebrated in this season.

The winter season in  India knocks in January and February. As per the Hindu calendar, this season fall in the months of Magha and Phalguna. The season lies before Spring and after Pre-winter.  Dryness, cold winds, occasional rainfall and snowfall are common in Winter. The average temperature of the season is 20 degrees centigrade. It is the coldest season amongst all. The cold breeze passes through the hole of the ear and nose and impacts the human body a lot. People like to live in houses and eat hot eatables.  The Kharif crops are ripe amid the season. The backyard is full of Paddy and wheat crops. A large number of different fruits and flowers are available in this season.  The season is very suitable for Rabi crops. The festivals like Pongal, Shivratri, Lohri etc are celebrated.

Table of Six Season of India

No, India has six seasons. People usually count winter but they leave pre-winter. Pre-winter is also the season of India. Pre-winter falls in November and December. As per the Hindu calendar, these season occurs in the Agrahayana and Pausha ( Agahan and Poos) months.

Q.What months are each season?

There are 12 months in a year and each season is equally divided. That means a season has two months duration in a year.