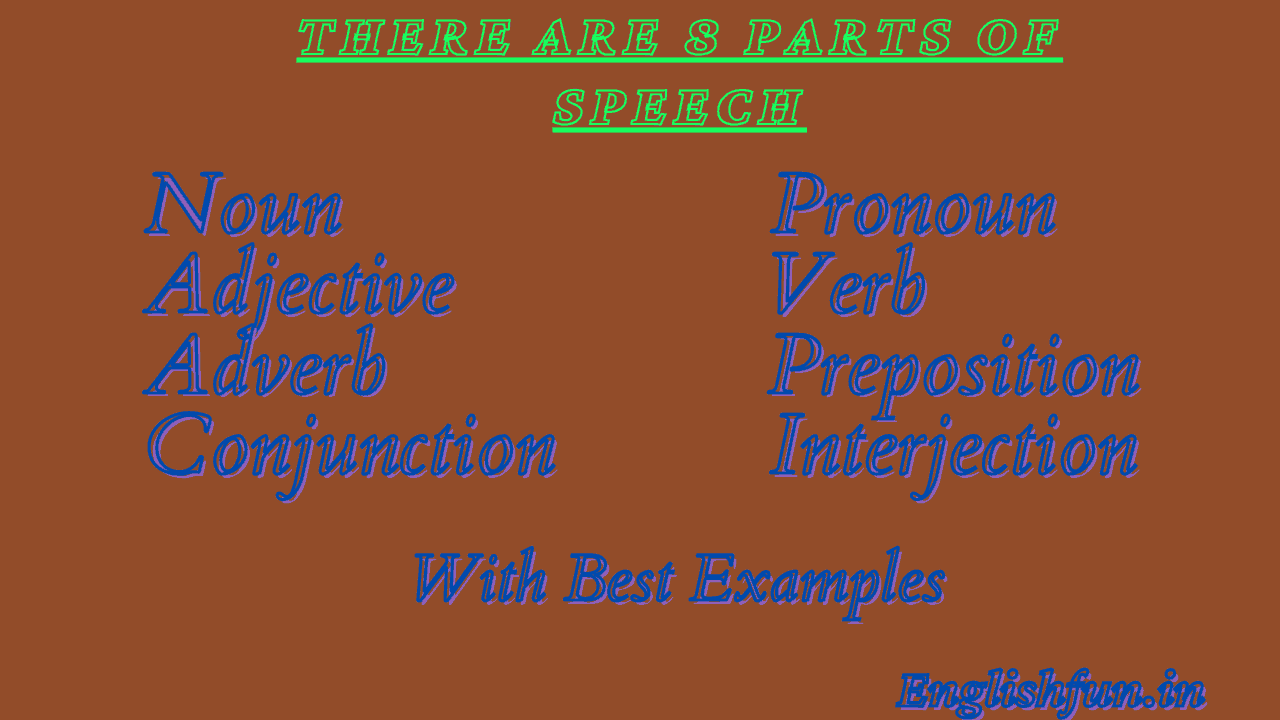 Let’s start this discussion on parts of speech examples

There are 8 parts of Speech

The noun is the name of anything.

OR A Word having a name is called noun.

There are five kinds of noun

b.Common Noun: The word which shows the common name is called Common Noun.

Difference between Proper and Common Noun

Examples: Mob, classroom, army, police, cattle, a crew of sailors, a team of players, a class of students e.t.c

e.Abstract Noun: The noun which can neither be touched nor seen but felt only is called Abstract Noun.

A word  that replaces a noun is called Pronoun

OR The word comes for a noun is called Pronoun

Ram is a good boy

He is a good boy

The toy is very costly

It is very costly

Ram and Shyam are friends

An adjective is a word that qualifies a noun or a pronoun in the sentence.

OR The word which shows goodness or badness is called an adjective.

Ram is a good boy

This is a fast train

A word that shows the action and state of a being are called a verb.

He is going to Patna.

I have played cricket.

He is going to Patna

Suman has a car

Alia Bhatt was going to Mumbai

Nathasa Dalal has a B.M.W car

Note1: If any sentence has two verbs then the first is a helping verb and the second one is the main verb.

Note 2: If a sentence has a single verb then it is always the main verb.

It is a word that qualifies a verb, adjective or adverb

This flower is very beautiful.

Sonam has solved the sum quickly.

Kamya is fond of music

Ayansh sat on the last bench

My friend is in the park

A conjunction is a word that connects two words, sentences, phrases, and clauses.

Give me a pen and paper

I am going to Patna because my friend is there.

Geeta is beautiful but Rani is Intelligent

The words showing the sudden feeling of either happiness or sadness is called interjection.

Oh! you are here.

Alas! I were the Prime Minister of India.

Hurrah! we have won the match.

Wish you a very successful day!

27 thoughts on “Parts of Speech Examples for all Classes”